Faculty of Wood Sciences and Technology

Faculty of Ecology and Environmental Sciences

Rector of the Technical University in Zvolen 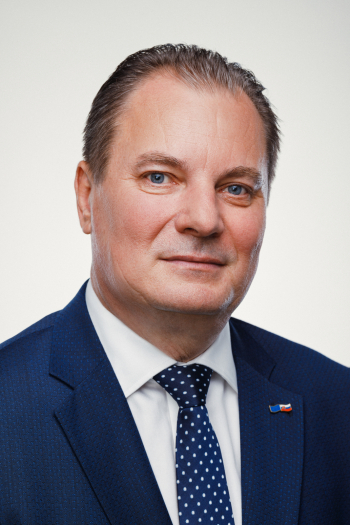 He graduated from the University of Forestry and Wood Sciences and Technology (Technical University at present) in Zvolen in 1987. In 1994, he obtained the PhD degree in the discipline of Agricultural and Forestry Phytopathology and Plant Protection. In 2002, he defended the habilitation work and obtained the scientific-pedagogical title of Associate Professor in the branch of Applied Zoology. In 2005, he was nominated by the President of the Slovak Republic as the University Professor for the branch of Applied Zoology.

In the years 1987 – 1989, he worked for the Low Tatras National Park District in Banská Bystrica. Since 1989 he has been working at the Technical University in Zvolen, where he still works as a university professor and researcher. Within the pedagogical activities, he is a guarantor of subjects in the field of Ecology and Zoology. In his pedagogical and research activities, Professor Kropil has been specialising in solving problems of sustainable development, applied zoology and forest ecology interlinked with economic, ecological and environmental disciplines. He was a manager of several projects and as a national coordinator, he solved ten international projects. He is an author and co-author of more than 100 scientific and specialised works with more than 500 responses.

Professor Rudolf Kropil has participated in various long-term foreign internships, study and lecture stays – in the Forestry Research Institute in Hannoversch Münden, Federal Republic of Germany (1985), at universities in Bern, Switzerland (1992 – 1994), in Copenhagen, Denmark (1996) and Oxford in the United Kingdom (2001). He has also lectured at the University of Land Management in Vienna (Austria). He has participated in short-term stays at the universities and research institutes in the USA, Canada, Japan, Australia and most countries of the European Union. In the years 2003 – 2006, he was a representative in the programme committee of the 6th Framework Programme at the European Commission in Brussels. Moreover, he worked in the advisory board of the Minister of the Environment of the Slovak Republic. He was a member of the domain programme COST at the European Union and a coordinator of the research team Game Protection and Management within the International Union of Forestry Research Organisation (IUFRO). In 2000, he was awarded the PhD prize and the gold medal for the significant contribution to research in the fields observed by IUFRO at the world IUFRO Congress in Kuala Lumpur, Malaysia.

Since the year 2012, Professor Kropil has been a chairman of the Scientific Board of the Technical University in Zvolen and a member of scientific boards of nine university and research workplaces in the Slovak Republic and Czech Republic. Since 1999, he has been a chairman or a member of several editorial boards of the international and Slovak scientific and professional journals. On 30 May 2014, he has been elected as a President of the Slovak Rectors′ Conference at its 67th meeting, which came to the effect from 5 June 2014 for the first two-year term of office; the second two-year term of office came to the effect from 5 June 2016 at the 76th meeting of the Slovak Rectors′ Conference.